When I started my career, I was lucky to work on a legendary Operating System named Novell Netware. I got my first job because of a hacking adventure that me and my roommate Arvind did in our college on top of an upatched Netware installation. The reliability and robustness of Netware may make you believe in magic. But it was just a well-engineered, old-school product. One of the most popular instances of its robustness, was the epic uptime of 16 years as covered in arstechnica. 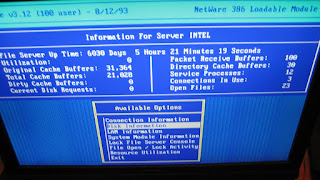 This was not an one-off situation either. We had multiple customers with years of uptime. In one of the academic institutes, the uptime was well into decades, that multiple sysadmins changed, but the netware box tirelessly worked on. At some point of time, nobody knew where the server was physically located, as nobody looked at it as everything worked fine.

In almost all the cases, the hardware failed before the software. The software was engineered so well that it would have run forever on superior hardware (albeit not so efficiently capable of using the modern hardware in its true potential). Those days, even the hardware was built to last for decades. It was the good old times before the planned obsolescence.

Fast forward to today, 2021. I have a Redmi 4 android phone, built by the mass manufacturer Xiaomi. I bought it on May 30th 2017 and still use it everyday. I always purchase things for long-term. I believe in BuyItForLife principles. I maintain my hardware properly (Fully discharge and then recharge, handle with care etc.). Even my prior phone, a Motorola E398 lasted me a about a decade, before the charger gave up.

Today during the lunch break, I went out looking in search of a home. My ever busy teammate Seshachalam sent a message to me on Slack at that time. I got a notification in the Android pull-down notifications. I tried to open Slack to see the message and got this error message: 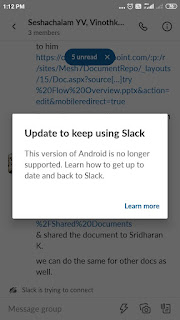 It seems Slack will no longer work on Android phones that are just about 4 years old. Slack got acquired for 27.7 billion USD a couple of years back. They must have a lot of good engineers. Xiaomi is a cheap, chinese mass manufacturer, who sells hardware at a fraction of what iPhone costs. If the software slack is getting obsolete than a hardware optimised for cost, we engineers, as a [pseudo-]species, are doing something terribly regressive and getting worse. Netware was an entire operating system, with file, print sharing and they could provide an uptime of decades. Slack is a messaging app, which should not have problems running in < 5 year old hardware.
Slack has a responsibility to keep running on old hardware, if not for anything else, but just for our planet. Even if 0.5% of total number of slack users (which should be comfortably in tens of millions) have to update their perfectly functioning smartphones, just because slack won't work, imagine the e-waste that would be generated. Imagine the water cost of these smartphones. All these ewaste will be then dumped in poor third world nations, causing more harm to them.
Being green, environmentally responsible does not mean just optimising the server side cost. Companies like slack, zoom, etc. which have become indispensable, in the post-covid world, need to do better and maintain better longevity for their software.
If nothing else, Slack could just provide a lite version which has only plain text messages shown and no emoticons, rickrolling, etc. Even GMail has a basic HTML view.

Anonymous said…
Good one Sankar. Very apt and timely. I hope the engineers at Slack get to read and reflect on this.

Popular posts from this blog

December 27, 2020
My Macbook Pro I have a Macbook pro retina 15 inch, that I bought in 2016. A few days back, the battery started bulking up and the laptop has totally stopped working. It has grown so big now that I cannot keep the laptop in a flat surface; it almost rocks like a see-saw. The touchpad panel is also feeling the bulge. The Macbook pro is not even switching on now, presumably to safeguard against battery explosions. I bought the laptop 4 years back, for about 200,000 INR (~2700 USD / 2200 EUR). Electronics are very costly in India :( This is the pre-touchbar Macbook pro. I did not like the new keyboard in the then new Macbooks (the first edition with the touchbar). Luckily, I did not purchase the touchbar version which probably is one of the worst electronic devices ever manufactured. I took my macbookpro today to a nearby Apple service center and I was told that the battery replacement would cost about 40,000 INR (~550 USD / 450 EUR). For such a costly laptop, it has a terrible battery lo
12 comments
Read more